This is a place to practise grammar. Many links are taken from englishexercises.org  or liveworsheets.com (these are interactives worksheets you can do onine) unless stated otherwise.

Spelling - Doubling consonants at the end of words in English

a, an and the with or without vowels

A similar rule applies to the
The+consonant is pronounced /ðə/: the glass, the computer...
the +vowel is pronounced /ðɪ/:: the egg, the onion...
the + sound /ju:/ is pronounced  /ðə/ : the European Union, the USA...
Try this easy flash activity and also try to pronounce all of the articles properly

Visit englishexercises to do some activities on possessive adjectives and pronouns

The Simpsons by Victor (Possessive adjectives)

The Simpsons - Possessive adjectives, an interactive worksheet by victor
liveworksheets.com

This, that, These, Those

Practise them here. by masai089 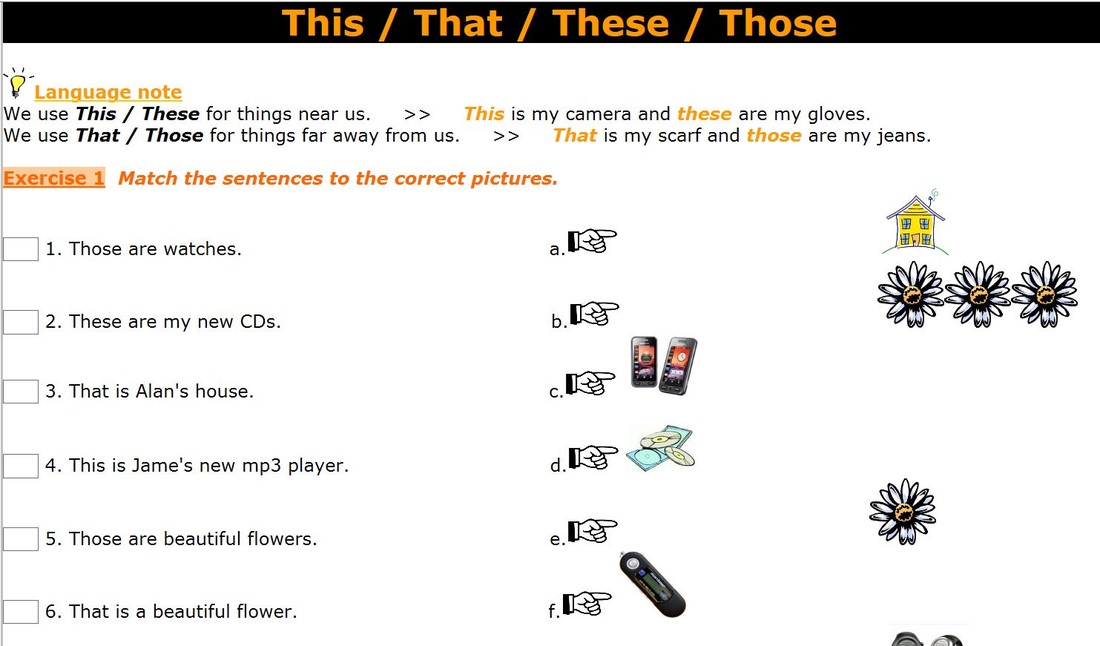 by masai089
More practice with two live worksheets from LIVEWORKSHEETS.

Time and Location are expressed with these prepositions. Visit https://enjoyourenglish.wordpress.com/2013/09/17/at-on-in/ to get an infogram.
Practice on at, on, in, for  time and places

Have got by Mada_1

Have got - Has got, una ficha interactiva de mada_1
liveworksheets.com

The Spanish Royal Family and The Past Simple

WORD ORDER IN SENTENCES. Some links to help you organise your writing: http://www.eoilangreo.net/guia_expresion/Ingles/orden1.htm and http://www.ego4u.com/en/cram-up/grammar/word-order

On this website http://menuaingles.blogspot.com.es/p/por-donde-empezar-en-este-blog.html you will find many resources: listening activities, advice to practise other skills and a range of courses of English language.

All trademarks and registered logos that are shown here as quick weblinks are the property of their respective owners.This site was created for non-profit educational purposes. We always try a fair use of the content included on this website and we do not intend to incur in any copyright infringement. If you feel any particular content should be deleted for any reason, please contact below.